Another fabulous Interview of a ‘CAT’ artist: John Kanzler

We are so honored to have our second CAT ARTIST inteview done by Kathy Temean, who did a lovely one on my son and artist Jeremy Tugeau last week! Her Blog is below for more fascinating and helpful reading!

http://kathytemean.wordpress.com
This week’s is about JOHN KANZLER who has been a valued artist with my agency for over 15 years (fellow CT artist originally).  I was attracted by his sense of humor and this has stayed evident though he’s changed his painting styles and mediums over the years.  HUMOR IS ALWAYS GOOD!
Thank you Kathy for letting us ‘borrow’ this interview to brag further!        Enjoy,,,
Also of note is that his Book LUCY from Random House, which you will see in the interview has JUST LAUNCHED on JULY 12th!  Hope you’ll want to go out and buy it for the children in your lives! 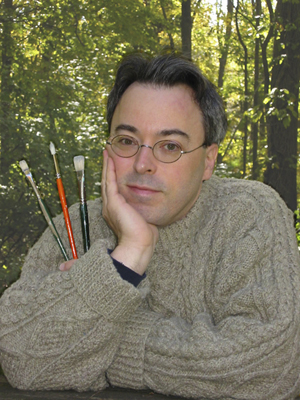 John Kanzler grew up in Norwalk Connecticut in a house formerly of William Steig’s and currently lives on a small farm in Greenfield Massachusetts with my wife Diane and his daughter Lorelei. They have several sheep and a llama or two. I have been drawing on things as far back as I can remember and is completely a self taught artist. Most recent titles include CHRISTMAS PUPS (Albert Whitman & Co.), LITTLE LUCY (Random House) and PRICELESS GIFTS (August House). When not doing any of the above, I generally pursue a crazy range of interests, from astronomy to paleontology.

Question: Have you seen your style change since you started?
Okay, you are asking me to go back and look at twenty years’ work now. Afterwards I am either going to feel amazingly hip and current, or simply unchanging, obsolete and depressed!

In essence, I would say no, I am still me and my art reflects that. Years ago I would not have agreed. I exposed myself to lots more influences and allowed them to rub off. Now, I am my own main influence and happily so. On the surface (that is to say, technically), I certainly evolved over time. I think I generally keep an idealized version of what “my” art should look like, with respect to color sense, painterliness, etc. I will always love nice visible brushstrokes and drybrushing, whether painted traditionally or digitally. I always look at characters through Norman Rockwell glasses…So there is that consistency that I always strove for. Overall, perhaps my palette has toned down a bit.

QUESTION: Tells us about the materials you use, paper, paint, brushes, pencils, etc.
Currently, I am working on a mac (an older G5 1.8MHz dual-processor, upgraded RAM and lots of external storage…until I win the lottery) running Painter and Photoshop mainly. I use a large Wacom Intuos 3 tablet instead of a mouse. When I switched full-time into digital painting, I had waited until I was sure I was emulating my acrylic painting style fully to my satisfaction. I accomplished that by customizing many of my digital brushes, and creating custom painting textures from scans of actual gessoed boards. I felt that this was a critical process that has helped to keep my art distinctive. 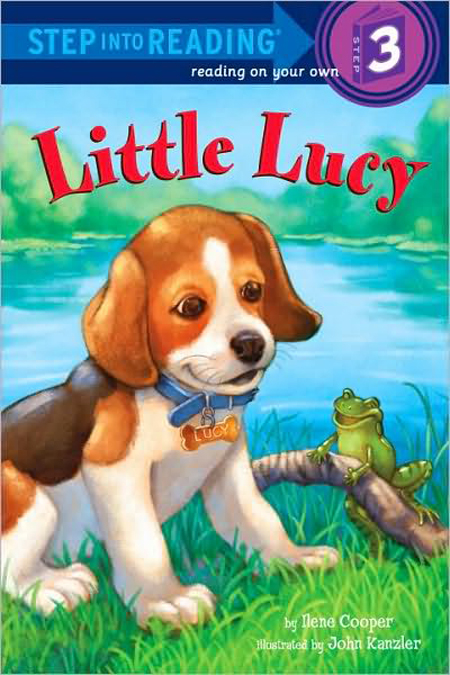 QUESTION: Did you ever try to mix mediums?Early on, I tried lots of combinations of pencil, ink, paint and paper. Paper texture was really a player in my stable of tools. I had started in colored pencil and usually combined watercolor or acrylics into that. Finally I moved wholly over to paint and stayed with acrylics.

QUESTION: How did you get your first picture book contract? When was that?It is hard to remember. Early on, I had done readers and work for some smaller educational publishers and packagers. Gradually, the scope of these projects increased, mostly because of doing my best on each job I ever received, and having an agent going to bat for me on a daily basis. She increased my exposure and got my better samples in front of the right people. Eventually trade book offers came to us.

QUESTION: Did you go to college for art?I am self taught all the way! 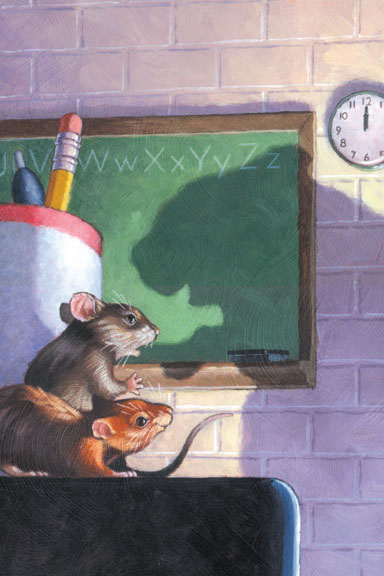 QUESTION: Do you send out promo pieces?
My agent, Christina Tugeau does many mailings each year. She also runs a vigorous email campaign designed to keep all of her artists fresh in clients’ minds. These mailers sample art from many of her artists. 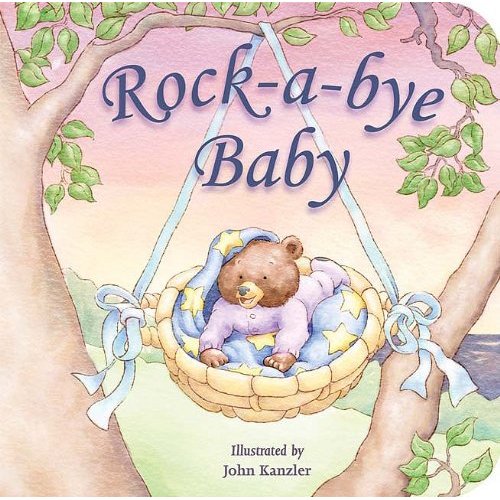 SKETCHES: When I create pieces for promotion, I often compose on the spot. A final piece may bear no resemblance to the final art, but I allow my ideas to develop over several iterations. In the EENIE MEENIE work in progress series (tiger image), some minor changes wee incorporated midway, so included a jpeg of that. But the earliest concept sketches were no more than blobs on a page. Individual characters are developed and brought into place like a jigsaw puzzle, and each one may further change the others.

For work for publication, clients need to see and edit a more exact rendering. So my sketches for clients are generally very tight, with no surprises in the final art.

Below are a few examples of how John works.

QUESTION: Before you went digital did you spray anything on your final pieces?

When I painted in acrylics, there was no need. Colored pencil pieces usually just carried a friendly note to dust off any wax bloom that may develop over time.
Graphite/charcoal pieces usually had a spray coat of fixative on them.

As for digital painting, if I hear something funny on the radio, there is the risk of spraying coffee on my monitor, but that’s about all.

QUESTION: When did you first realize that you wanted to make a living doing illustrations?Probably in kindergarten, where I realized I liked to draw more than anything else. As I went along, I developed a lot of diverse interests (which I still have), but I always expressed those interests in drawing.

QUESTION: How many children’s books have you done?
Between trade books and readers, probably a couple of dozen; I never counted, really.

QUESTION: What were the first artwork you did for children?
I had originally set out to be a cartoonist, but I did some editorial magazine work early on. I had done lots of illustrations in children’s magazines, as well as games and puzzles. 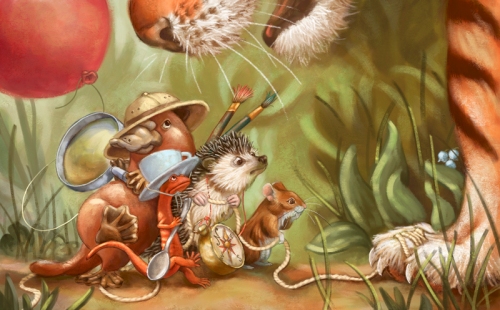 I like to shoot my own reference photos when I am trying to render difficult or dynamic poses. My wife Diane volunteered to be my protagonist for many of the spreads of THE OLD WOMAN AND HER PIG(Harpercollins), while I was PAUL BUNYAN. While we are all enjoying this current heat wave, I want to point out that it was 96 degrees outside when, a few years back, when I donned the full winter outfit for my own reference photo!

I keep all my photos in binders for future possible future reuse.

QUESTION: Have you ever written and illustrated your own book?Nothing published, but I have a STACK of half-written manuscripts, unfinished dummies and conceptual sketches that may or may never see the light of day!
PAUL BUNYAN- Random House 2008

QUESTION: How long have you been representation by Christina?Chris has put up with me for more than fifteen years now, I believe, bless her heart!

QUESTION: Tells us about the materials you use, paper, paint, brushes, pencils, etc.
Currently, I am working on a mac (an older G5 1.8MHz dual-processor, upgraded RAM and lots of external storage…until I win the lottery) running Painter and Photoshop mainly. I use a large Wacom Intuos 3 tablet instead of a mouse. When I switched full-time into digital painting, I had waited until I was sure I was emulating my acrylic painting style fully to my satisfaction. I accomplished that by customizing many of my digital brushes, and creating custom painting textures from scans of actual gessoed boards. I felt that this was a critical process that has helped to keep my art distinctive.

QUESTION: You started out doing acyrlics and now are more focused on digital. Why the change? I decided I did not want to have toxic materials around when my daughter was born.

QUESTION: How did you get started with digital? Did you take classes on using digital painting programs?Again, I am completely self taught. A few books and LOTS of practice. Fortunately Painter is a lot of fun to just mess around with that it never seemed like work to me. The transition was quite easy. Perhaps easier than when I switched from dry media to acrylics many years ago. This time I was already established in my personal style.

THE OLD WOMAN AND HER PIG- Harpercollins 2007

QUESTION: Are you someone who is drawn to new technology?I am very much drawn to OLD technology! I have a collection of antique typewriters, brownie cameras and a restored Victrola. I write with fountain pens and use a pocket watch. So, I am as backwards thinking as I am forwards thinking! But I embrace software happily, and love learning all the time.

QUESTION: Do you have a drawing tablet?Yes, an Intuos 3, large size.

Question: I notice that it looks like you have sketch lines in eenie meenie. Did you draw and scan them to your computer or did you draw them directly into the computer?
I draw right at the computer now. 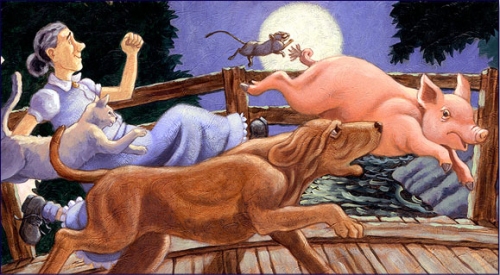 QUESTION: What software do you use for your digital work?
Painter 9 & 11, Photoshop, Illustrator primarily.

QUESTION: How long does it take you to do a double page spread digitally?About the same amount of time as it does to paint one, though I expected at first that it would be faster. Clients certainly expect that it is both faster and easier, but it is not. Once a sketch is done/approved, final art is anywhere from three days to a week of fully dedicated time, depending on complexity. If it is work for myself, I am sure I take a lot longer, if only because I can.

QUESTION: Do you have a studio in your house?
After my daughter Lorelei was born, the word “studio” became a rather flexible term! Being a work at home parent has been, and continues to be a wonderful thing, but there were concerns about having paints open around an infant/toddler. For a while my studio was also part time nursery and playroom. With respect to decor and toys, though, it really didn’t look much different! Since she was in the studio with me a lot of the time, I phased out traditional paints and completed my transition to digital art. Now I occupy a much smaller corner where I have a computer desk and all the bells and whistles I need with it.

QUESTION: Do you do other types of work to help pay the bills?Yes. I now also work when I can outside of my discipline, which I have not had to do for the past fifteen years or more. Still, I count myself as very lucky so far, since we are definitely in one of the harder hit industries during this prolonged economic downturn. I also do some pro bono graphic work for nonprofits and learn when I can, and try to keep myself schooled in web design and coding. Now there’s a field where one can feel obsolete real fast.

To see more of John’s work visit: http://www.johnkanzler.com And look for his new book, THE CHRISTMAS PUPS in August. Thank you John for sharing your story with us.

1 Response to Another fabulous Interview of a ‘CAT’ artist: John Kanzler